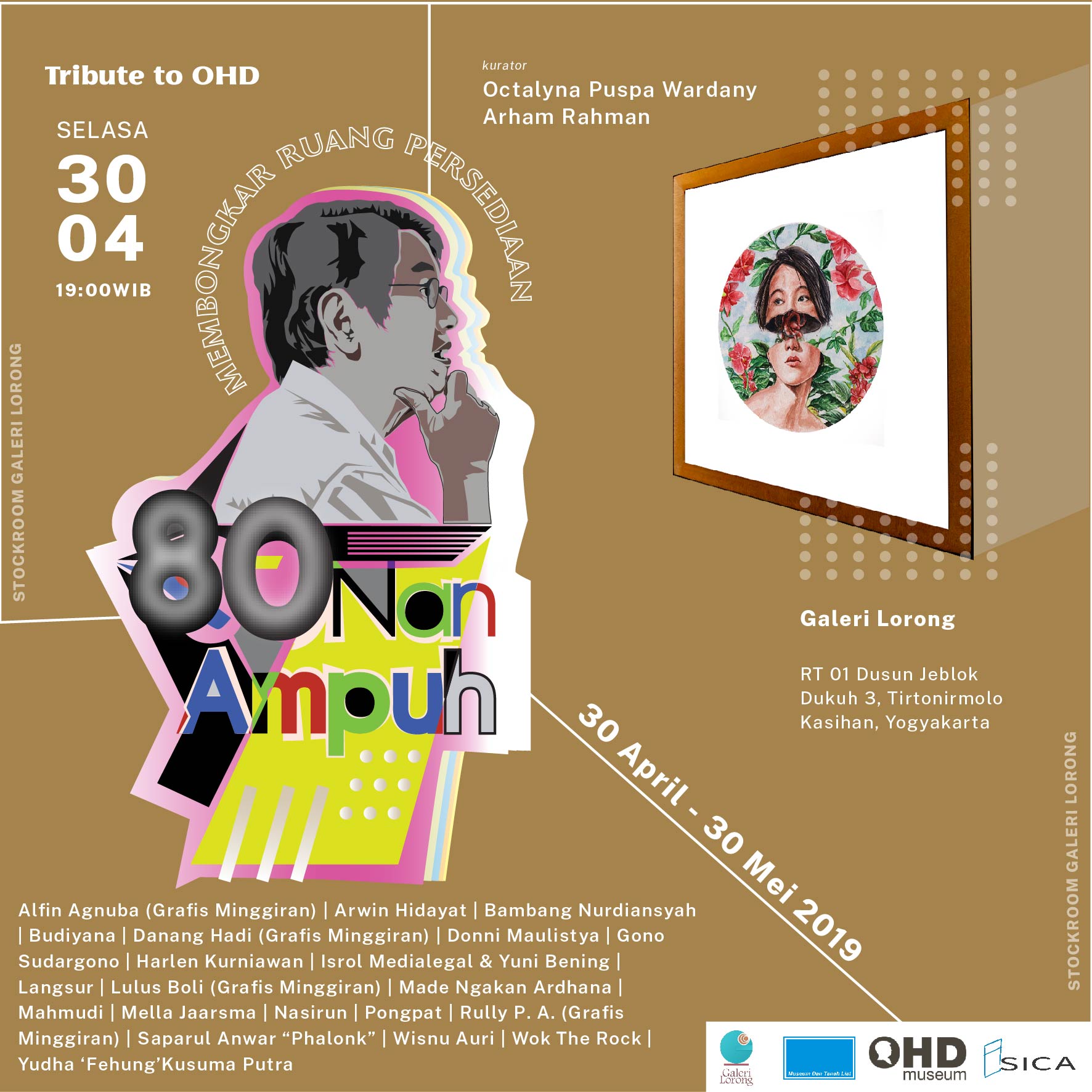 Stockroom is usually interpreted as an inventory for storing useful items. An inventory space also often compares with a warehouse, judging by their similarity function for storing items. Only that a warehouse has a connotation of as space for rarely used items or even the used ones. Meanwhile, when we referring to the economic understanding, inventories are items which are actively traded. A stockroom is then able to be interpreted as a storage space for actively traded items or often known as products since it is an output of a process of production. What about the stockroom at Lorong?

The stockroom in Lorong is located in the middle of Lorong building. It is located behind the main building which consists of a gallery, café, merchandise shop, office, and meeting space. Beside the stockroom, there is a footpath among the greenery plants which leads to the two homestay buildings which have 6 rooms. The room is still connected to the two-story main building, the stockroom is indeed functioned for storing the traded goods. What it is meant by goods are not a mass-produced products, it is specifically one piece of artwork.

The exhibition at Lorong Stockroom is the first show initiated to celebrate the birthday as well as a tribute to Oei Hong Djien –a figure who dedicated his love to art and endearing his passion to maintaining the art scene. His passion brings out the art to life that the artists are inspired to maintain keep growing in their art practice. It is an honor for Lorong to be allowed to contribute in the 80th celebration of OHD who seem to look always exuberant, full of joy, and yet still able to observe sharply on a piece of art.

The selected headline is dismantling the stockroom. This exhibition is indeed displaying the artworks which are being stored in the stockroom, we are unpacking all the works in this two-story stockroom, not to mention our separate stockroom located in the north –Jalan Sadewa. As we can see, the 21 artworks are being shown on the first floor of the stockroom in Nitiprayan. Overall, the works which are being shown are two dimension works. There are only two of three-dimensional works, in which one is made of resin and bamboo –a work of Budiyana. This sculpture is a part of the work entitled Kerokan which consists of sketched, paintings, and sculptures. The other three dimension work is by Harlen Kurniawan entitled Enigma –shaped like a white circle with a tap in the top-center, there is also cottons on one-third of the lower lane.

One of the installations by Wok The Rock, the curator of Jogja Biennale 2015, combines the two-dimension work: 3 photos and laminated certificates stored in a wooden box, entitled Biography of Authenticity. The work is showing the authentic life journey of people by presenting the photos and the certificate papers which are equivalent to a charter or a diploma paper. Our world is no longer questioning the speech or records of the people which made a person, or a group of people becomes meaningful. Our world is now in need of a proof which is able to be traced or identified, however, it is too time-consuming for nowadays people. It might be good if we go back, learning to our ancestors who are even more capable in leaving authentic evidence which can go through a thousand period of times, namely temples, stupas, inscriptions.

Although almost all of the works are two dimensional, the media and the technique are quite diverse. There are six graphic works completed by Donni Maulistya, a pressed letter entitled NUMBER 8 and 4. The artists from Grafis Minggiran (Alfin Agnuba, Danang Hadi, Lulus Boli, and Rully P. A.) with their intaglio, etching, and woodcut technique. One of these graphic works is presenting the work from Indonesian ancestors which is still standing strong, has become a reference for various people from various places, also still actively use as a ceremonial site for the Buddhist people. Borobudur in this work presents in a 25x25cm, one of the authentic proofs of the sophisticated civilization of the archipelago. One of the collaboration works of Isrol Medialegal and Yuni Bening combines a mural paint and a knit thread, entitled Share –showing the willingness of sharing space with others. The letter work on leave by Bambang Nurdiansyah (aka Bembeng) shows special expertise of using watercolor. Bembeng confidently sprays it on to the paper, it embodies a complete picture of the transparency and the gradation which made possible by watercolor.

The rest of the works are oil painting works from Nasirun entitled Carangan #5 which still strongly shows the artists capability in picturing a story on a painting; Pongpat from Vietnam who presents the sweetness of the eventide at a fishing village; Wisnu Auri with his struggling-story in Accept Yourself Series I; and abstract work of Made Ngakan Ardana about being grateful to entitle Don’t Forget to Pray Before Eating #6; the scratches of two dancers in the work of Mahmudi. Despite the acrylic painting works, Arwin Hidayat drew the depictions of human in his typical character where they are stretching and fulfilling the whole medium –entitled Lelaki Lelah (A Weary Man). Gono Sudargono presents his simple and firm strokes which depicts the story of Cindelaras and the rooster. A self-taught artist named Langsung who lives in Bali illustrates women giving birth in standing position –showing his admiration for the women’s strength while undergoing their natural cycle. There is also a work by Mella Jaarsma who uses different media about traveling nowhere, and there is also Fehung’s photography work mentioning about the relationship.

And then, the stockroom is being converted into a display room which is presenting the works which are stored in it. Not that space is spacious enough to display all of the works there. Meaning that there will be another opportunity when we will display the other works in the stockroom. There will be next Dismantling the Stockroom in Lorong.